Would you like to teach in our school? class trial

How long does it take to learn German? 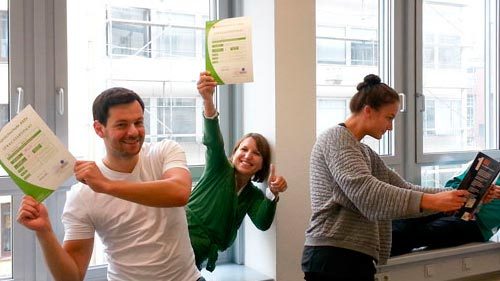 This is a very good question, which we as experts for German as a foreign language course in our language schools as well as in our online training in German are often asked by newcomers in learning German.

However, before we can answer such a question exactly, always first ask our customers how good the German language skills need to be.
Often, we get somewhat vague explanations, such as: Well, it’s needs to be to the level that I can talk to someone or, well, our colleagues have to be able to talk to the customers a bit. Such inquirers then often need an explanation on our part about how to roughly classify language skills and what the so-called levels of the European Reference Framework for Languages ​​actually mean.
Now to the explanation about the levels of A1 (practically zero beginners) to C2 (near native speakers).

What are the levels for learners of German?

The levels of the European Reference Framework of A1, A2, B1, B2, C1 and C2 are intended as a guide to ensure that holders of certain language certificates (in Germany, in particular Goethe Zertifikat, Test DaF or telc) are proficient in a certain level of German.

A1 is the level you can reach first and starts with zero knowledge. However, A1 certificate holders still cannot do much. In most cases, they are proficient in about 500 to 1,000 words and can only talk about themselves in a rudimentary way, as well as providing some information about their family and their own life situation. They usually have basic grammar skills (usually no cases for nouns), and they rarely have more than a few verbs in a present time (I am, you are, etc.) one past (I was, you were, etc.) and a future (you will go, etc.) use. The A1 certificate is often requested for au-pair stays in Germany or for the relocation of family members, especially spouses.

From a level of B1 (which is also the goal of the so-called Integrationskurse), it can be assumed that learners can get along well in a German-speaking environment (private and business) but will still make noticeable mistakes when speaking. For many foreign apprenticeships in the field of crafts, care or for the recognition of German citizenship, the B1 Examination Certificate is required by public offices.

Levels B2 and above give most learners good language skills. From a level of B2.2 or even C1.1, it can be assumed that it language skills will be sufficient for a university degree course held in German. Often candidates for these levels take the Test-DaF (German as a foreign language) or DSH to qualify for study in Germany.

How long do you need German as a foreign language for a level?

In general, German as a foreign language per level is based on a learning period of approximately three months of intensive, daily schooling of at least three or more full hours. You can sometimes reach levels A1 and A2 in as little as six to eight weeks, if the learning time per day exceeds 180 minutes and you have a German-speaking environment (friends, spouse, colleagues) who will not return to your native language after the course.  Not applying the newly-learnt skills is poison to learning German (or other languages for that matter).

Anyone who has a fairly high level of language skill goal, such as B2 or C1 as a level, should schedule at least nine to 12 months of daily intensive German courses or a visit to the nearest Studienkolleg (when in Germany) when starting with zero knowledge. If you have previous knowledge, you may only need three to six months for the level depending on your level of knowledge.

Time required for a German level in our German online courses:

Again, everything depends on how much time you can invest. The most intensive course in our online training runs three times a week over a one-month period, so it contains a total of 24 units for 45 minutes. In theory, you would need about 8 months from level to level during this period.
However, much depends on whether one makes the language still abroad and without special access to a German-speaking environment or whether the course is made for certain reasons within German-speaking areas and German can also be practiced after class. The more one accompanies the learner it will give him the opportunity to improve.

Being able to practice one’s German also means that new levels can be reached faster.

Can one really speak German with online courses?

Basically, one can assume that you can speak German quite well from a level of B1. This level can certainly also be achieved with German online courses. However, if you learn German with us at a level of A1 as a full-time German learner, it will certainly take you about one and a half to two years (without accompaniment and further practice after the online course), before you speaks good German and you can reach a level of B1. However, if levels of A1 or A2 have already been reached, levels of B1 or B2, you can reach levels of B1 or B2 in about half a year once a week or three times a week.

What are some tips In order to make progress with German as a second language in online schools?

We definitely recommend the creation of a German-speaking environment if the student is still abroad and has no real contact with the German language. This also includes the use of online media such as Deutsche Welle, German radio stations in streaming, news in German, online editions of German newspapers and the like. In another blog topic, we also show what online communities and apps for smartphones there are additional tools for learning German online. There are also a few tandem apps that can connect students directly with a German-speaking tandem partner, so that after class with the online instructor you can also train the same again.

Interesting German courses for you

German-online-training.com is a website of Sprachschule aktiv Onlinetraining GbR run since 2015 by the two company directors Martín Polo Villafan and Florian Burkhardt.

Do you need help?